The videos of the three days of 20th IFBDO/FIODS International Youth Forum are now online on our official YouTube channel!!! 😉

IYC Board will organize an international youth conference via streaming on the internet in summer 2020 with expert trainers from countries on all continents.
The dates are Friday August 21st, Saturday August 22nd and Sunday August 23rd. The planned times are from 10:00 to 12:15 (GMT).
We open the webinars and video-meetings to everyone, so that all blood donors and volunteers worldwide can participate, especially those who haven’t been able to take part in previous Forums for economic reasons or due to border restrictions.
We invite You to fill in the form at this link https://forms.gle/EgqYkTv5UPhowg7t8
SAVE THE DATE!!!
We are close to all the countries that are suffering losses from this horrendous COVID-19 pandemic.
We must resist. We will overcome it.

ONE BLOOD, ONE LOVE
IYC Team

International Youth Committee (IYC) conducted a live session on Facebook to let people know what IYC is, what its activities and vision are, to explain the role in the International Federation of Blood Donor Organizations (IFBDO/FIODS) and to communicate the current situation of the voluntary blood movement in various countries and continents.

You can also watch the video on our YouTube channel at the following link: https://youtu.be/KjJL2_hw4o8

GIVE BLOOD AND MAKE THE WORLD A HEALTHIER PLACE 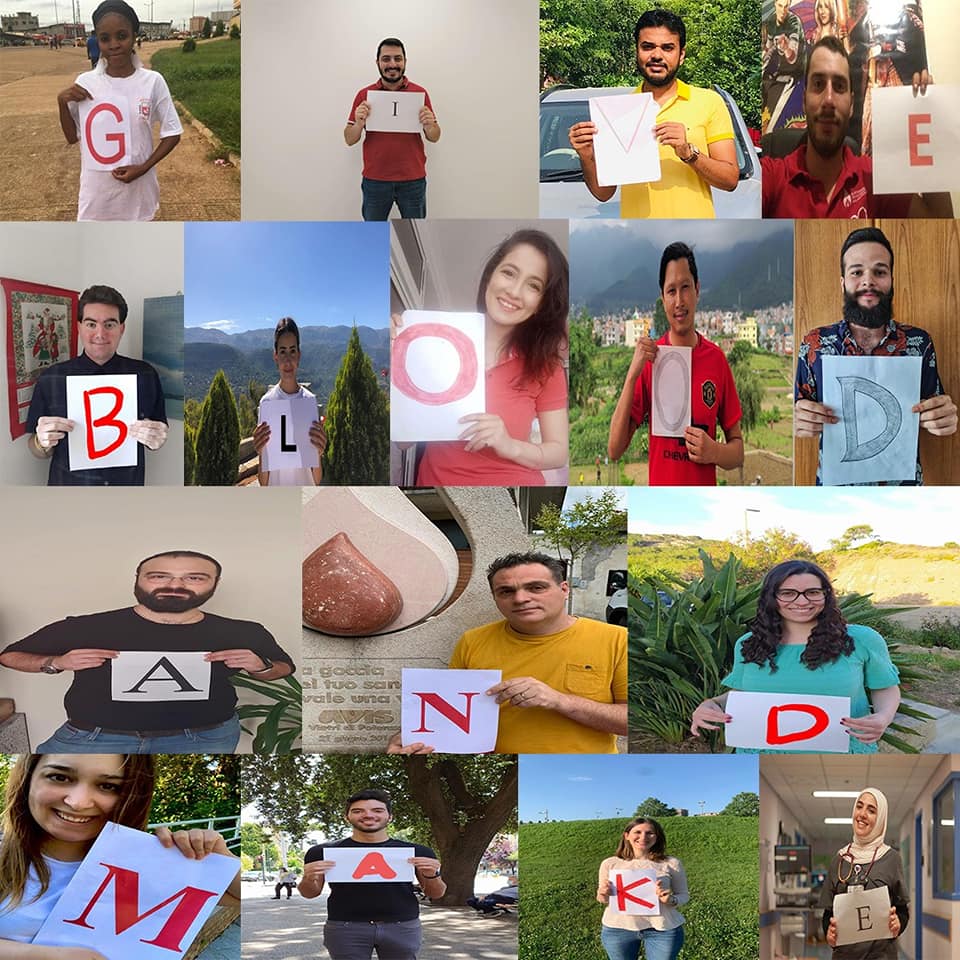 📍📌 Join the channel to be always updated on our activities!

We will publish all the videos that have been shot in the past years during our Forums and events, the promotional campaigns and the messages from the IFBDO/FIODS world … and so much more!!

Please find attached the letter from IYC Board in the three IFBDO/FIODS official languages.

For any clarification or information, write to fiods.iyc@gmail.com

Club 25 Nepal, a sister organization of Blood Donors Association Nepal (BLODAN), and International Youth Committee (IYC) of International Federation for Blood Donors Association (IFBDO/FIODS) have the pleasure to inform You about the upcoming 20th International Youth Forum, which will be held from 19th to 23rd of August 2020 in Kathmandu, Nepal. The Forum will be followed by trekking event to Ghandruk & Pokhara from 23rd to 28th August, which will be facilitated by IYF 2020 team.

The title of the Forum is “New Decade: New Blood Donors! Reaching Young Blood Donors”. The overall theme of this edition is how to recruit new blood donors and how we can encourage young people to start blood donation, starting from their 18th birthday.

The participation fees (€ 250) will cover Your accommodation, meals and transportation throughout the duration of the Forum. This cost does not include trekking cost because trekking event is optional.

Please express Your interest in joining this event by filling in this registration form!!!

The event is open to all young volunteers of the organizations affiliated to IFBDO/FIODS, and to all other associations working for the promotion of voluntary and non-remunerated blood donation across the world.
Program and further details will be communicated to You soon, stay tuned!
If You have any questions or need assistance, please do not hesitate to contact us.

Looking forward to Your participation!

The 19th International Youth Forum of IFBDO/FIODS was held from August 21st to 25th 2019 in the city of Baku, Azerbaijan. The participating countries were 11: Azerbaijan, Denmark, Georgia, Italy, Lebanon, Lithuania, Nepal, Norway, Holland, Portugal, Romania. The number of delegates attending the Forum was 60.

On the afternoon of Wednesday 21st August, the traditional Market of welcome was set up. It was a beautiful moment of friendship and brotherhood between people, where the delegates of the Forum were able to taste food and wine delicacies from the participating countries. That was an ice breaker event to get know each other better in an informal atmosphere, to see again old friends and to meet new ones. In turn, each associative delegation presented its nation in a funny and informal way; the IYC Board presented also the trainers of the Forum: Mirfariz Muradov, Martin Thomas Schlecht and Onur Oguz Dellal.

The official Opening Ceremony of the Forum took place on Thursday 22nd August at the Baku Congress Centre, a beautiful modern building with a very suggestive architecture. The ceremony was attended by the President of Central Blood Bank of Azerbaijan, the representatives of the Azeri government (Minister of Health and Minister of Youth / Sport) and the IFBDO/FIODS Secretary General, Dr. Abdelmalek Sayah. Each delegation officially presented its own nation, transfusion system and voluntary association. Some similarities and some differences between nations emerged during the exhibitions: the economic balance sheets, the number of donors, the history of the associations. In the afternoon, we attended the first training lesson on Project Management, which was held by the trainer Mirfariz Muradov. The lesson was organized on two levels: a lecture and some group work. The frontal lesson focused attention on the organization and management of the project, a theme that can be profitably conducted only by a team with a very strong synergy and will. In particular, the trainer analyzed the factors that determine the success or failure of a project, applying the concrete case to the world of volunteering. Using teamwork, we identified the main problems facing our voluntary associations: the low presence of young volunteers, the abandonment of some donors, the lack of plasma apheresis, the exclusion of homosexual donors, economic hardship. Each group was assigned a problem to solve by working as a team; at the end of the work, each group presented its solution in front of the delegates. The day ended with a convivial fish-based dinner in an elegant restaurant on the Caspian Sea.

On Friday 23rd August we visited the Central Blood Bank of Azerbaijan, based in Baku. The doctor in charge of the facility showed us the path followed by Azerbaijani donors whenever they go to donate blood. Starting from the reception room, where the interview with the doctor takes place and the first blood samples are taken, up to the collection point, set up with 10 donation stations. Each blood unit is numbered and subjected to health checks. Blood collection is mainly focused on whole blood, as red blood cells are in great demand in Azerbaijan to counteract the strong incidence of thalassemia. The requirements to become blood donors in Azerbaijan are age, good health, weight over 50 kg, height over 150cm. Men can donate up to 6 times a year, while women can donate up to 4 times each year. Plasma donation doesn’t occur by apheresis, but separation is performed in the laboratory. Over 70,000 units of blood are collected each year throughout Azerbaijan. In the afternoon, our Azeri friends offered us a guided tour of Baku city center, which proved to be a wonderful moment of friendship and sharing.

On Saturday 24th August, we visited the northern region of Quba, scene of tragic clashes between the Armenian population and the Azerbaijani population throughout the beginning of the 20th century, where many victims fell. In the morning, IFBDO/FIODS Secretary General Dr. Abdelmalek Sayah gave an introductory lecture on the role of the IFBDO/FIODS in the 81 countries affiliated to it. The ethical values of voluntary and non-remunerated blood donation and the role of the Federation in their promotion were particularly underlined. During the conference it also emerged that the conditions of some African countries unfortunately don’t reflect the essential criteria for a correct and safe blood transfusion, but it’s hoped that in the coming years this situation may improve. The day continued with some motivational team games organized by trainers: Taboo and Memory types focused on blood donation, youth volunteering and the ability to pay attention. In the afternoon we then visited the Quba Genocide Museum, a new monument built between 2007 and 2013 to commemorate the Azerbaijani genocide by the Armenians in 1918. The visit was very interesting because we were able to learn different information about the history of the country that hosted us during this forum, as well as remembering the importance of civil coexistence among people.

On Sunday 25th August we attended two training lessons given by the trainers Martin Thomas Schlecht and Onur Oguz Dellal. The first lesson dealt with the issue of malnutrition in some areas of the African continent, in particular Zambia and Togo. The trainer provided us with numerous data regarding the difficulties of some countries in finding food, drugs and in guaranteeing essential health care. Some diseases, including Ebola and Zika, have caused the death of many people and decimated the population of different areas. The second lesson concerned the funds for Erasmus +, a European project that gives chance to young people (between the ages of 17 and 30) to attend a period of between 2 and 12 months abroad to carry out activities of volunteering. The teacher explained the application methods for the participants and for the hosting organizations to the European program, enrollment practices entirely managed on the European Union web portal. This lesson also gave the possibility to all the delegates, divided into groups, to create their own Erasmus + project to be exhibited to the others, in the form of teamwork. The exhibition of each group has become a great opportunity to share new ideas and volunteering strategy among us all.

Furthermore, at the end of the Forum the elections for the renewal of offices and the selection for the next host country were held. The IYC Board took leave of the Delegates with much emotion, wishing the new elected members a good work; the elected members and the Delegates thanked the IYC Board for the tremendous work they have done over the years, for their commitment and for their valuable contribution to IFBDO/FIODS and youth volunteering.

20° International Youth Forum will be held in August 2020 in Nepal, as voted unanimously by the Delegates. The Nepalese delegation explained the activities that will take place during the Forum and it’s committed to constantly updating the IYC on the organization developments. 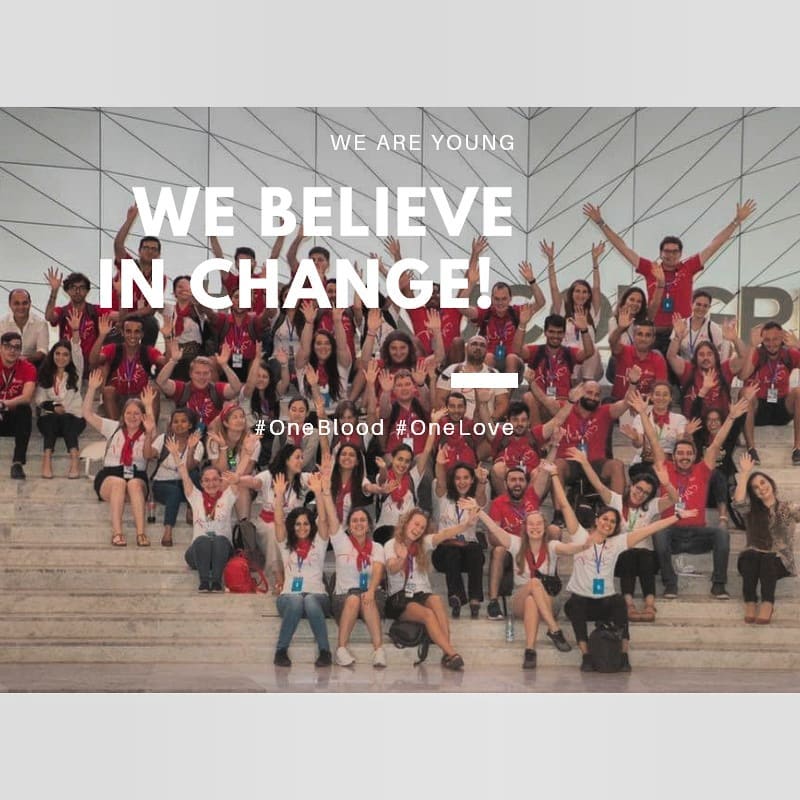 Organizations from around the world have already expressed their interest in joining the 18th International Youth Forum, happening in Aveiro – Portugal from the 23rd till the 26th of August 2018!

The theme of this year’s event is “SHARE LIFE, JOIN THE TRIBE! Blood donors, a gift to the community“. It will focus on the role of young volunteers in promoting blood donation around the world, as well as their role in improving the quality of life in their surroundings.

The conference is open to all young volunteers between 18 and 30 years old of the organizations members of the IFBDO and of the other associations working for the promotion of voluntary and not remunerated blood donation in the world.

If you would like to join, please register on this link.

See you in Portugal!